Hello! And welcome to my new website. I’ve almost got everything up and running. This is a test.

This isn’t my typical post. But in addition to things that make me happy, like crafting and cooking, I also – occasionally – think about BIG questions. Sometimes I amuse myself that I could solve all those big questions if anybody would just ask. 🙂

But when I think about BIG questions that pertain to kids, more often than not, as a parent, I’m not really sure what the right answer is. Raising kids is tricky business!

The issue I was thinking about recently pertains to issues kids face. If this gets to be a habit, maybe I’ll make a category for that, but at the moment it will just stand on its own.

Are Adults Enabling Bullies at School?

You probably grew up hearing the stories of bullies. The kind that steals your lunch money. Or your lunch. Or maybe you were harassed by exactly that kind of bully.

I, myself, was never tortured by bully as a child, even though I was always one of the tiniest kids in the class. At least if some kid was trying to intimidate me I was blissfully unaware. So I grew up more thinking that bullies were a legend of schools of the past, characters made only slightly more real by those terrible after-school-movies that were popular in the 70s.

But now it seems that you hear about bullies in the news all the time. Child and teen bullies are still here and more menacing than ever. One theory is that the anonymity and remoteness of social media makes bullying easier. But that doesn’t explain the seeming increase in face-to-face bullying between kids starting as young as elementary school.

Violence in society is often debated. Movies are violent. Computer and video games are violent. Real violence kills children in the streets of the inner city. I, myself, abhor violence in books and an on-screen. In short, I can’t stomach it.

In spite of that, I would argue that “western society” as a whole is less violent than it has been in the past. We don’t gather in stadiums to watch men fight lions to the death like they did in Rome. We don’t gather in the town square to watch mass executions with the guillotine like they did during the French Revolution. We don’t take picnic lunches and sit under parasols on the hills above the battlefield and watch men die in mass like they did during the Civil War. (I just recently found that last one out, and I’m still shocked by it.)

Yes, there are still places in the world where atrocities are occurring even as I type, but I would argue that we are still progressing. At least we are appalled by it and not watching the real occurrence as entertainment. And these atrocities are not happening in your average school.

What is true in your average school is that corporal punishment is no longer allowed. Fewer parents spank their children. I’m not bringing that up to say that undisciplined children are the problem. I’m bringing that up to point out the physical means of settling differences and disciplining kids has decreased, so why are bullies threatening in physical ways that they have seen less modeling of?

I started wondering about this when I heard about a kid at our local elementary school who was cornered in the bathroom and felt physically threatened. The matter was brought up with school personnel and the issue was addressed. The situation, at least for now, seems to be better.

Because the parents of the victim want to make sure this doesn’t happen again, they also talked to the kid about how they can change their behavior keep them from being a victim of bullying. They told him that if he feels cornered, in spite of what he’s been taught about violence not being the answer, he should fight his way out. His response was to break into tears that he would get sent to the principal’s office. The parents told them they would support him and be right in the office with him if this happened. But this gets to my thought.

Zero tolerance for fighting in school, not matter who started it, is typical. I think this is a slight but significant difference in the way fighting was viewed when we were in school ourselves. My husband is one of the least confrontational men I know, and even he has stories about physically standing up to bullies.

Instead of protecting kids, does this zero tolerance rule actually give bullies more power? Because now bullies can threaten or pick a fight knowing that a “rule follower” won’t fight back for fear of getting in trouble with the adults. Fear that fighting back will tarnish their permanent school record. I admit that I’m reluctant when I tell my own kids to fight back because they might get in trouble at school. My husband can give them more specific instructions and with much more enthusiasm.

I think the issue is further clouded by the awareness that issues are not always black and white. We are reluctant to pin blame on a kid in case we are wrong and being unfair. We don’t want to tarnish the “alleged bullies” permanent school record when we can’t be certain whose fault it was, and so we punish both kids. But is this fair if one of them is innocent?

If we tell our kids that fighting back is never the answer, are we making them weak? Why do we not give our children permission to defend themselves from harm? Are we creating sheep that are in danger of getting hurt by more dangerous bullies as they get older?

If we give kids permission to fight back, will we increase the amount of fighting in school? Are we telling them that violence is the answer?

I’m not sure what the answer is. Will giving our kids the courage and permission to stand up for themselves in a physical way if necessary increase or decrease bullying and violence? What do you think?

The roast beast at our Christmas dinner this year. Oops! My china is a bit uncoordinated.

Not only that, it was always the exact same menu: turkey, dressing, sweet potatoes with pineapple, ambrosia, cherry coke salad, peas and asparagus casserole. For dessert we had pecan pie and pumpkin pie with perhaps a another dessert added like chocolate pie. Yes, we were heavy on the pies! Is there another dessert? Oh wait, at Christmas we had Christmas cookies if there were any left by the time the 25th rolled around. (There were six kids.)

It was all foods I absolutely loved, or grew to love. I certain I didn’t love the asparagus when I was five. I do know I started eating it just for the buttered toast drenched in cream of mushroom soup that was on top!

It was the only time of year we had most of those dishes, but a bit repetitive. So when I finally got the chance to host my own Christmas, I decided I wanted to do something different for dinner. I’ve changed the menu every year since, but a beef roast is often featured….

END_OF_DOCUMENT_TOKEN_TO_BE_REPLACED

Don’t miss out! Pick up your copy in the Kindle Store of Miri Attwater and the Ocean’s Secret for the special 99 cent price! 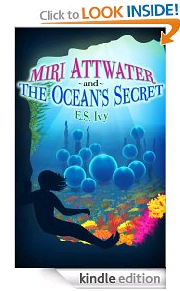 Coming soon! If you’ve been waiting on other ebook formats, Miri Attwater and the Ocean’s Secret is now uploaded to Kobo and Barnes and Noble nook awaiting their approval. Which one is the fastest at book approval? We’ll see! I’m currently working on a Smashwords upload as well.

Find E.S. Ivy Around the Web

Please note that some of the links on this site are referral links which means I may get a small commission if you make a purchase after clicking on them. You pay exactly the same price as you would if you made the purchase directly. I only link to books and services I personally recommend and also it allows me to show you images relevant to posts. esivy.com is a participant in the Amazon Services LLC Associates Program, an affiliate advertising program designed to provide a means for sites to earn advertising fees by advertising and linking to amazon.com.